You are here: Home / Blog / “Back in the Day”; Montessori and Common Core

The school year has picked up momentum, routines are ingrained, family evenings now contain various after-school activities… and homework. Are you the only bright, conscientious parent who morphs into a frenzy of crazed disbelief when faced with how your child is asked to do certain assignments? Not a chance.

Take simple mathematics. “Back in the day” we memorized the steps. Used paper and pencil. Didn’t necessarily need to show our work, just come up with the correct answer. Now there’s Common Core Mathematics. Check this out:

Tyrone Howard, a professor at UCLA’s Graduate School of Education, states the Common Core curriculum “is designed as a tool to help students catch up with their counterparts in countries like China and Singapore, whose standardized test scores have surged past the United States in recent decades.” Paul Reville, a professor and policy analyst at Harvard’s Graduate School of Education, argues that “Common Core is simply ‘common-sense logic’ anchored on the kinds of skills and knowledge necessary for young people to have in order to participate meaningfully in the 21st century economy.”

Making simple subtraction into an abstract series of paper-and-pen columns and dots will help our children succeed in today’s rapidly changing world? Maybe. But the cold-hard truth remains, nobody knows. And let’s face it, frustrated children with disbelieving parents isn’t a great starting position for finding out.

If the basic idea is to turn skill concepts into concrete actions, creating hands-on learning that is intrinsically motivated and globally understood, why are educators and policy-setters trying to reinvent the wheel?

Over 100 years ago, Maria Montessori created The Golden Beads. This simple, instinctive material remains in use today in Montessori classrooms all over the world to introduce  math operations (addition, subtraction, multiplication, division).  Following the philosophy of always starting with the concrete, rather than the abstract, the Golden Bead material is a physical, tangible representation of numbers.  There are single beads, representing units (1).  Ten of these beads strung together in a straight line by a wire, is called a ten-bar and represents a unit of 10.  It literally has 10 beads on it.  Take ten of these ten-bars and string them together to form a square and you have a hundred-square (again, it  contains exactly 100 individual beads).  Ten of these hundred-squares wrapped together make up a thousand-cube. Manipulating these materials gives students a hands-on, immediately understandable version of the WHY in math. 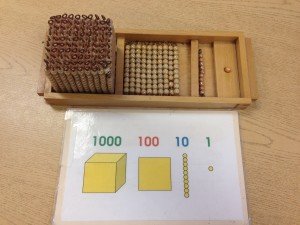 Collaboration and Montessori Encourage Children to Step Up

Number One Predictor of Your Child’s Success

Eye to The Future