You are here: Home / Blog / Montessori and STEAM

What never got old, but is now new? 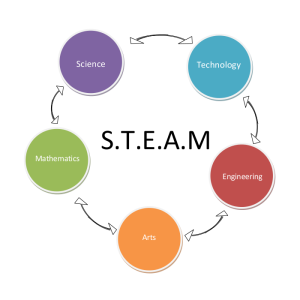 Sounds like a Popsicle stick riddle, doesn’t it? Would you believe the answer is both educational, philosophical, and a matter of semantics?

STEAM. Science and Technology interpreted through Engineering and the Arts, all based in Mathematical elements. Education’s current hot-to-trot trend. Georgette Yakman, who developed STEAM in 2006, describes the concept as “providing an avenue for formally teaching the inter-relationships of how subjects relate in real-life. STEAM-style education can be enjoyable and meaningfully delivered in more engaging and deeply embedding ways”.

Even President Obama stands firmly on the STEAM bandwagon. The U.S. Department of Education declares “The United States has become a global leader, in large part, through the genius and hard work of its scientists, engineers and innovators. Yet today, that position is threatened as comparatively few American students pursue expertise in the fields of science, technology, engineering, art and mathematics (STEAM)—and by an inadequate pipeline of
teachers skilled in those subjects. The White House has set a priority of increasing the number of students and teachers who are proficient in these vital fields.”

But here’s the kicker: highly-acclaimed cornerstone elements of STEAM education are identical to those which have remained tried-and-true within the Montessori Method for over 100 years. Hands-on, personalized, project-based learning. Inquiry-based, child-centered, experiential instruction. Developing “Can Do” students who innovate and negotiate successfully within our rapidly-changing world.

STEAM may be novel. But Montessori is classic. And classic, of course, never goes out of style. Doesn’t it make sense, instead of following “newbie” STEAM momentum and waiting for President Obama’s induction of future specialty-trained teachers, to check out your local Montessori School now? Come for a visit…..

Why A Montessori Summer Camp?

Why What You Learned In Preschool Is Crucial In The Workplace